If you need to get your indoor air quality tested, our professionals are ready for the job. We have been providing the best air duct cleaning services in California for many years, including various repair and replacement jobs. Give us a call and let us help you get the clean and fresh air you deserve! Get The Best Air Duct Cleaning, Repair And Maintenance

What is a Return Air Duct?

A return air duct is a fundamental part of nearly all ventilating, heating, and HVAC systems. Generally, forced air HVAC systems use a ductwork to circulate heated or cooled air throughout a building. In addition to such a system, most buildings also contain a return system. The purpose of the latter system is to extract air from a room and return it to the Air Handling Unit (AHU) to mix with the supply air, re-condition, re-filter, and re-circulate throughout the building. 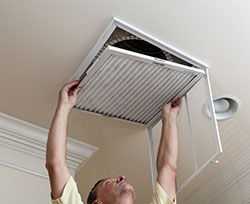 Ductwork is basically a series of sectioned conduits, which convey either cooled or heated air from the AC or the furnace, throughout a building. Generally, technicians place ducts under the floors on structures raised off the ground or in the attic for the structures with slabs.

To allow one unit to carry out the function of both cooling and heating a building, most HVAC systems have a coil that is located indoors and a condenser that is outdoors. For cooling, the ducts carry heated air to the condenser, which contains a refrigerant. The compressor in the outdoor unit compresses the refrigerant into a high-pressure gas. The gas then travels through the coil in the unit where it is loses heat and changes into liquid. The liquid then enters the evaporator coil and transforms into a low-temperature gas. This low-temperature gas absorbs heat entering the outdoor unit from the return duct. The process repeats itself until it achieves the temperature set on the thermostat.

It is important to seal leaks in ducts in order to optimize efficiency, reduce leakage and control entry of pollutants into a building. For instance, for cooling purposes, cooler air remains closer to the floor while warmer air rises closer to the ceilings. The return duct pulls the former upwards, passing it through the latter that is closer to the ceiling. If there is a leak in the duct system, it could suck in unconditioned air, which would consequently take more time and electricity to re-condition.